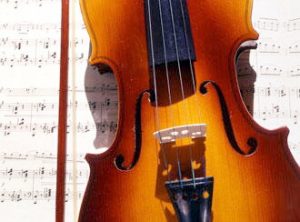 Scherzo (Italian. Scherzo – literally “joke”) is a joke piece, it can be part of a symphony, a sonata, a quartet or an independent piece of music in a lively, rapid tempo, with sharply characteristic rhythmic and harmonic turns, in a three-part size.

In the music of the XVI — XVII centuries – a small instrumental. So called canzonetta (songs) for one or more singers with humorous poems.

Such scherzo were written by C. Monteverdi, A. Brunelli, B. Ma Rini. Since the beginning of the XVII century. the word “scherzo” also meant plays for various instruments, close to capriccio (a free-form instrumental piece, in a brilliant virtuoso style) with their bizarre change of episodes, moods.

The authors of such plays were A. Troilo, I. Schenk. A merry play-joke was part of the instrumental suite as one of the parts. Such a scherzo is found, for example, in a multipart piece of work like a suite in part no. 3 for clavier by JS Bach.

From the end of the 18th to the beginning of the 19th century, it took up a solid place in the symphony and sonata, displacing the minuet from there, but at the same time began to develop as an independent genre. From now on, it is present in most traditional symphonies as one of the middle parts (not the beginning or the final).

The scherzo became an obligatory part of the four-part sonata-symphonic cycle – a symphony, a quartet, sonatas, etc. This is a quick, fun piece in the size of 2/4 or 4/4. The humorous, even naughty, playful nature of the scherzo gives a surprise, a sudden change of musical images, a pointed rhythmic pattern, sometimes quirky, and sometimes funnyly rustic, but always with clear accents.

The scherzo is characterized by movement activity, and sometimes swiftness, dance.

In addition to humorous images, a scherzo can embody images of lyrical, dramatic, fantastic, even sinister. In the sonata-symphonic cycle, the scherzo supplanted the part that was obligatory before, the minuet. This happened gradually, the minuet, as it were, transformed into a scherzo. As a designation of one of the parts of the work, the term “scherzo” was first used by J. Haydn in the so-called “Russian quartets”. The word “scherzo” called the last but one “minuet” parts of the cycles. In L. Beethoven, beginning with the 2nd symphony, the scherzo finally took the place of the minuet and became an obligatory part of the symphonic work (the 3rd, less often the 2nd part). The largest masters of the scherzo in the sonata-symphonic cycle were Schubert, F. Mendelssohn, A. Bruckner, and A. P. Borodin, P. I. Tchaikovsky, A. K. Glazunov in Russian music. Outstanding samples of scherzo in the Soviet symphonic music were created by N. Ya. Myaskovsky, S. S. Prokofiev, D. D. Shostakovich.

Countless scherzos demonstrate all sorts of musical humor. There was a whole complex of techniques capable of transmitting such plans: humorous interchange of motifs transferred from register to register or from one instrument to another, all sorts of surprises – “surprises”, filing some simple phenomena in unusual, seemingly strange lighting or their kink, displacement, etc.

The scherzo also developed fruitfully outside the sonata-symphonic cycle. The highest achievements include the four Chopin scherzos, the content of which is wider and more serious than the usually scherzo.

In the XIX century, in the era of romanticism, an independent genre of a one-part play, called scherzo, appeared. The outstanding place is occupied by the four piano scherzo by F. Chopin – real dramatic poems in which sharply dramatic episodes alternate with light, lyrical. R. Scherzo was also written by R. Schumann, I. Brahms, M. A. Balakirev, Tchaikovsky. Scherzo was composed not only for a piano or some other instrument, but also for an orchestra. The orchestral scherzos were written by Mendelssohn (scherzo from the music for William Shakespeare’s comedy “Midsummer Night’s Dream”), P. Duke (scherzo “The Sorcerer’s Apprentice”), MP P. Mussorgsky, A. K. Lyadov, I. F. Stravinsky ( “Fantastic Scherzo”) and others.

Posted in able to independently, about three hundred, but why build, desire to engage in administrative, domestic musicians have come, drummer very quickly, especially a record company, instrumental suite, sonata-symphonic cycle, William Shakespeare's comedy
Tags
album released in June arias Both new musicians came choirs conflict comparison developed sonata form direct contact with Drummer puts accents eliminated extraneous thoughts final part interaction of breath lucky people masses music-making from not necessary not returned overture perhaps possible to imagine pounding principle of rondo reflects romances serious music demanded since it songs spend a lot of time together starting that parity of measures theatrical rock group Roman the author receives the composers then his remuneration the ode the voice to concentrate only transactions Usually there are very likely that his range vicious circle vocal-speech training well-known producer while it manages to balance whose larynx i
<a href="http://thisismyurl.com/downloads/easy-random-posts/" title="Easy Random Posts">Easy Random Posts</a>
eliminated transactions masses to concentrate only album released in June choirs music-making from final part lucky people Both new musicians came pounding principle of rondo then his remuneration vocal-speech training serious music demanded the composers theatrical rock group Roman well-known producer whose larynx i perhaps starting not necessary very likely that his range vicious circle direct contact with songs Drummer puts accents overture spend a lot of time together reflects romances since it conflict comparison the ode arias that parity of measures while it manages to balance the voice developed sonata form not returned Usually there are the author receives interaction of breath possible to imagine extraneous thoughts
Romance"Music is the soul of poetry, it clarifies and opens it. It makes a poetic word deeper in meaning and easier to perceive. The spirit of music in the emotional…